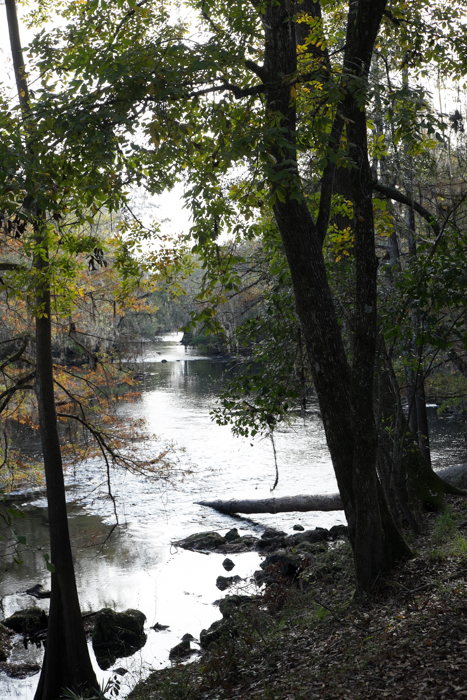 This is a 31.5 mile route beginning in Fort White, FL. It travels down the grade-separated asphalt Ichetucknee - O'Leno State Trail, connecting Ichetucknee Springs State Park to O'leno State Park, and is one of the few bicycle trails which connects two state parks. Most of the O'leno to Ichetucknee State Trail trail runs parallel to SW Fellowship Street (CR18). This route starts just north of Fort White, at the library.

In Fort White, there are several local restaurants that riders can enjoy. The trail then travels east across U.S. 441 to O'leno State Park & River Rise Preserve State Park. The trail completes a 3.5 mile loop in the scenic state park, then continues back towards Fort White. Riders then travel all the way to beginning of the Ichetucknee River Greenway, traveling on the trail for a short time along Ichetucknee Springs State Park to the river.

Riders then return along the same trail to Fort White. While at O'Leno State Park (entry fee), check out the sink which drains the Santa Fe River. The entire river drains into a large sink which flows underground for approximately three miles to re-emerge at River Rise State Park. The gap between the river's disappearance at O'leno State Park and re-emergence at River Rise Preserve State Park is known as the Natural Bridge. The Natural Bridge represented one of the few ways early settlers could travel north-south in Florida without having to cross a river (and pay a ferryman). Camping is available at O'Leno State Park. Ichetucknee Springs State Park (entry fee) is a crystal-clear spring-fed river of approximately nine miles in length. It is well-known as a tubing the river. Visitors can rent a tube from a nearby concessionaire, although the tube may be difficult to transport by bicycle! Tubing the river takes approximately 90 minutes and visitors can tube the river as many times as they like before park closing. A short video about the trail can be viewed here.