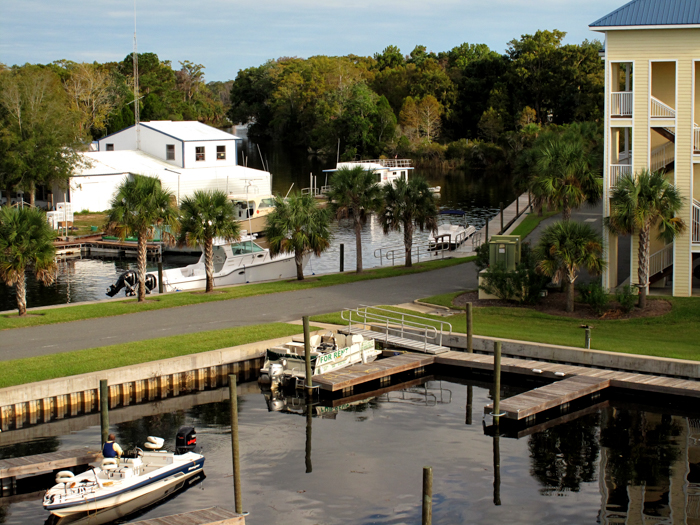 The tour starts at the Ochlockonee Bay Bike Trail in Sopchoppy and ends at the terminus of State Road 40 in Yankeetown. Due to the broad coastal marsh and freshwater wetlands of the Big Bend coastline, the tour route relies on U.S. 98 as its backbone. Much of the route is rural and isolated. Cell phone reception is spotty. Limerock/dirt roads are followed in a few segments.

For riders wishing to avoid limerock/dirt roads, work-arounds are suggested. Riders are advised to bring mosquito repellent, plenty of water, and appropriate attire for changing weather conditions. The route provides a number of interesting out-and-back segments which provide access to some of the most scenic parts of the Big Bend coastline. Riders who are so inclined may travel the out-and-backs or skip them, thereby reducing the overall mileage of the route.

The Big Bend Coastal Route starts at the terminus of the 12.5-mile Ochlockonee Bay Bike Trail in the City of Sopchoppy and follows the bike trail to its terminus a Mashes Sandy County Park at the Gulf of Mexico. From here the route does a U-turn, backtracking to U.S. 98 where it turns right. Following U.S. 98, the first out-and-back is encountered at mile 28.6 at the intersection of U.S. 98 and CR 355 (Spring Creek Highway). The 10-mile out-and-back takes riders to Shell Point Beach via CR 357 (Shell Point Beach Road). From here the route takes a U-turn and takes the rider past U.S. 98 to Edward Ball Wakulla Springs State Park, home of one of the largest and deepest freshwater springs in the world (entry fee). The park also has a nice one-hour guided boat ride of the springs. Food, lodging and restrooms are available at the state park.

From Wakulla Springs State Park, the route proceeds easterly approximately five miles to its intersection with the St. Marks Historic Railroad State Trail, a paved grade-separated multi-use path. The route follows the state trail south across U.S. 98 to the trail's terminus in the town of St. Marks where full services are available (http://cityofstmarks.com). From the town of St. Marks the route returns to U.S. 98 where it turns right and proceeds for approximately 2.5 miles to its intersection with Lighthouse Road (mile 66.9). This 20-mile out-and-back takes riders through the St. Marks National Wildlife Refuge to the iconic St. Marks Lighthouse at the Gulf of Mexico. Restrooms and picnic areas are available.

From St. Marks Lighthouse, the route returns to U.S. 98 and proceeds easterly approximately 18 miles to its intersection with Aucilla River Road/CR 14, which provides a 12-mile out-and-back to Econfina River State Park (entry fee). Full facilities are available inside and outside the park. From here the route returns to U.S. 98, turning right and proceeding approximately 19 miles to the City of Perry, where full services are available. Downtown Perry, like many of the small towns in north central Florida, has been experiencing a resurgence and is worth a visit.

From Perry the route proceeds approximately five miles along U.S. 98, then veers right onto Beach Road/CR 361 to Keaton Beach and Dekle Beach. These are very small communities consisting primarily of vacation rentals. The route continues southeasterly along various Taylor County paved roads to the unincorporated communities of Steinhatchee and Jena (full services available). These roads are the closest paved roads paralleling the coast along the entire route. Steinhatchee has one of the few bridges over a Big Bend coastal river. Therefore, the route crosses the bridge to the unincorporated community of Jena. Since Steinhatchee and Jena are adjacent communities separated only by the Steinhatchee River, many consider them as one community.

Proceeding over the bridge, riders must make a decision as to whether to turn right and follow the route along three Dixie County unpaved road segments or turn left and return to U.S. 98. Should riders decide to return to U.S. 98, however, they can still turn right on CR 361, commonly known as the Road to Nowhere, to its terminus just past Cow Creek, make a U-turn and follow CRs 361 and 358 all the way back to U.S. 98. Once returning to U.S. 98, riders can turn right and follow the highway to Cross City and the Nature Coast State Trail. Before deciding to follow the actual route, be aware that some Dixie County coastal roads are subject to closure during wet conditions. Gated roads may be closed to vehicles but are open to bicycles.

From CR 351, turn right and proceed to the City of Horseshoe Beach where full services are available. Riders wishing to bail out of the remaining two limerock/dirt road segments can continue on CR 351 to Cross City and the Nature Coast State Trail. From Horseshoe Beach, the route makes a U-turn and proceeds north along CR 351 to its intersection with the limerock/dirt Pump Mainline/SW 782nd Avenue at mile 220.2.

The section of the route from this point to Suwannee contains two segments of limerock/dirt roads before returning to asphalt. The first limerock/dirt road segment, known as the Pump Mainline, is approximately 10 miles long. At the end of this segment, the route intersects with paved CR 357/Main Street. This paved road can be used as a bailout to return to U.S. 98 and the Nature Coast State Trail. The second limerock/dirt road segment, known as the Dixie Mainline, is approximately 6 miles long and terminates in the unincorporated coastal community of Suwannee.

For those proceeding on the route, turn right (east) on the Pump Mainline and continue along the route as it proceeds through the 53,000+-acre Lower Suwannee National Wildlife Refuge (see http://www.friendsofrefuges.org/dixie-mainline.html for an excellent description of this portion of the route). Turn right at its intersection with paved CR 357 at mile 226.5 and proceed to Shired Island (http://visitdixie.com/rv.php) which is located at the terminus of CR 357 on the Gulf of Mexico. From Shired Island riders can backtrack to U.S. 98 via CR 357 to avoid the last segment of limerock/dirt road.

Those continuing on the route will ride an additional 10 miles of limerock/dirt road to its intersection with paved CR 349 and the unincorporated coastal community of Suwannee where full services are available. From Suwannee, the route proceeds north along CR 349 past U.S. 98 to the unincorporated community of Old Town and the Nature Coast State Trail. Turning right on the trail, the route follows the Nature Coast State Trail over a trestle bridge. At mile 271, riders may continue to the CR 232 intersection to take advantage of Hart Springs and Otter Springs. Alternatively, riders may turn right (south) on the rail and bypass the two springs.

Continuing south on the Nature Coast State Trail, the route proceeds to State Road 320, where riders turn right following a striped bicycle path on the shoulder of the State Road to Manatee Springs State Park and on to Cedar Key. A seven-mile segment of the route between Manatee Springs State Park and Cedar Key is a limerock/dirt road. Riders wishing to avoid the limerock/dirt road segment may do so by making the trip to Manatee Springs State Park an out-and back to the state trail, continuing south on the state trail to its terminus, then proceeding west on CR 345/SW 4th Avenue, following the County Road as it turns left at NW 70th Avenue, and continuing to its intersection with CR 330. From here, turn right (west) on NW 70th Street/CR 330, and following this road to its intersection with CR 347, which connects to Cedar Key.

Proceeding straight across U.S. 98, the State Road is known as the Follow That Dream Parkway, named after an Elvis Presley movie which was filmed in the area. Proceeding on Follow That Dream Parkway/State Road 40 past U.S. 98, the route diverges onto Riverside Drive in the coastal community of Yankeetown for approximately two miles until rejoining the state road. The Big Bend Coastal Route ends at the terminus of State Road 40 at the Gulf of Mexico . Additional information about the area, its attractions, communities and services can be found in the individual inland county bicycle routes.