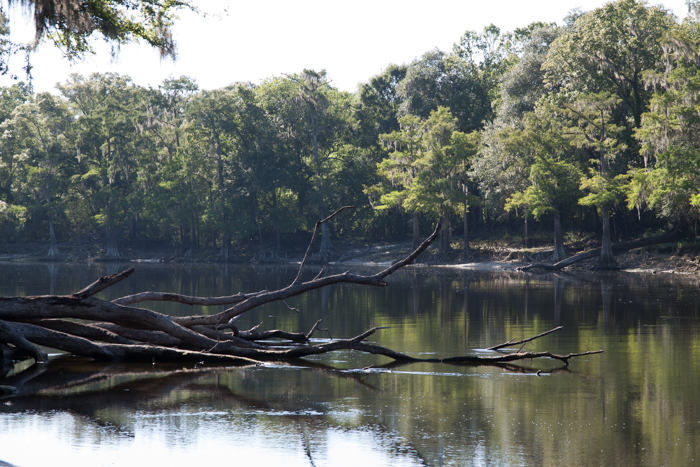 This ride is for those who would like to see Gilchrist County using a shorter route than the 60-mile Trenton Loop. It takes rider through Waccassassa Flats, the Santa Fe River as well as an optional out-and-back to Ginnie Springs. Expect to encounter moderate levels of traffic on the State Roads and U.S. Highways and lighter traffic on the local roads. The route starts in the town of Bell on North Main Street/U.S. 129 which has 3-foot wide paved shoulders.

The route proceeds for approximately 12 miles on U.S. 129 past rolling hills and open farmlands to the Santa Fe River. At this point the route does a u-turn and heads back. At mile 11.7, the route intersects NW 110th Street. Riders can turn right (west) for a two-mile out-and-back to Ellie Ray's RV Resort Ellie Ray's RV Resort to grab something to eat and drink sitting by the Santa Fe River . The route proceeds to a t-intersection with Gilchrist County Road 138. Turn left. There are no paved shoulders on this portion of the route as it goes along rolling hills through Waccassassa Flats, a large area of wetlands and lakes which stretches the entire length of Gilchrist County. After approximately seven miles, the route intersects State Road 47.

Turn right (south) on State Road 47. The road has a three-foot paved shoulder and passes a nice wetland rich in wildlife. At mile 21.7, the rider may turn left (east) on NW 65th street for an optional 5.5-mile out-and-back to Ginnie Springs. Note that part of this this short stretch is over a crushed lime rock road. The route continues along State Road 47 to its intersection with Gilchrist County Road 340/State Road 236. Turn right (southwest) at this intersection and proceed approximately eight miles along flat, winding curves through Waccassassa Flats. This section of the route consists primarily of forested lands. Turn left onto U.S. 129 and proceed back to Bell. In Bell you will find  Akins BBQ, great BBQ with a wide variety menu. You will feel right at home! Also in Bell is Burger Spot (great burgers made the old fashion way). For more information about the area, check out VisitGilchristCounty.