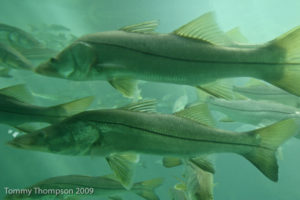 Snook are one of Florida’s most popular gamefish

Traditionally, in years past, West Florida’s snook population remained south of our Natural North Florida waters.  That was largely due to cold winters, which either run snook into warm residential canals on the upper suncoast, or kill them outright.  However, winters over the last ten or twelve years have been warm, and snook have moved north of the Withlacoochee River and into Levy and Dixie counties.

Snook are fragile regarding water temperature. But they’re also fragile in terms of being good to eat. Despite the tight slot (28-33 length) and bag limit (1 per angler per day), lots are killed for food and not considered as the great sport fish they are. So, my advice is to conserve the species and practice catch-and-release during this short, 3 month (September, October and November) season. 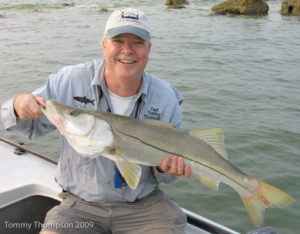 A nice snook, caught near Yankeetown in Levy County

Snookdon’t really like cut bait, but they can be “trained” to eat nothing but live white bait, shrimp or pinfish. Case in point: Anclote Key, in Pinellas County, where anglers and guides spend as much time netting bait as they do fishing. And so long as you know how to bait a hook for snook, if they’re there and “trained”, you’re likely to catch one. Sport fishermen, on the other hand, find snook to be wary and more difficult to attract to artificial lures. They’ll strike topwater plugs, MirrOlure 52M18s (that look like white bait), D.O.A. “glow” shrimp or white jigs and flies. In fact, if you’re targeting snook, stick with something white. And when you hook one an artificial lure, you’re going to the get a great strike, a great fight, and have a better chance to release the fish unharmed. Snook, gut-hooked by live baiters, have a tendency to die.

There are a few good places to look for snook on the Levy and Dixie county coastline.  A few have been caught in the East Pass/Deer Island area between Cedar Key and Suwannee. More seem to have shown up in Waccasassa Bay.  Folks are even having a hard time catching reds for the “pesky” snook getting in the way. I’d be sure to head to Yankeetown and fish the waters around the spoil banks of the Barge Canal and Withlacoochee River mouth.