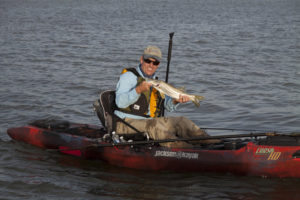 “Common Snook” are a sub-species of the general snook population and are found all over the state of Florida–except where it’s too cold!  And, historically, on Florida’s Gulf Coast they’ve not ranged much farther north than Tarpon Springs, in Pinellas County.  However, since 2007, waters and winters have warmed, and both the snook and the red and black mangroves have inched northward.  Now, guides are targeting snook for clients at Yankeetown and Cedar Key–and a few are showing up as far north as the mouth of the Suwannee River.

Snook are probably the most-sought-after game fish in Florida, and are protected by some fairly complicated regulations.  Size and season control whether you can keep a snook, and it’s been said that due to sportfishermen practicing catch and release, each snook in Florida has been caught at least 1.5 times!  But, if they’re in season and you’re “fish hungry” fillet a slot-sized fish (Be sure to skin it, otherwise your dinner will taste like Ivory Soap!) and fry up some “snook fingers”.

Snook can be wary targets for anglers, but the fight is worth it.  They jump, they run and they often use their sharp gill plates to cut off your leader.  They’re very particular about their food and usually only eat lively baits like pinfish, pigfish or big shrimp.  They also attack artificial baits, especially topwater plugs, flies or soft plastics.  If you’re in doubt about a color to use, think “white” and if you’re not using strong 30-pound fluorocarbon leader, go trout fishing!