When our fishing trips follow rainy days, waters drain from swamps and creeks into the Gulf, often producing dark water.  Much of that coffee-like stain is due to tannic acid from the swamps, but if there’s wind, the water can also be cloudy.  And, for the most part, you’ll find that fish have a more difficult time finding your lure or bait. 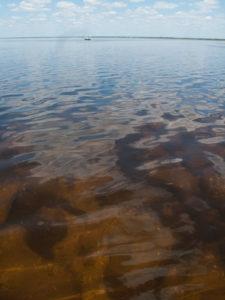 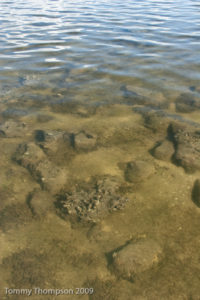 Our Gulf waters are famously clean and clear, except after big rains!

Local anglers often turn to lures that either make noise or smell to attract game fish when the water darkens.  Noisy lures are good, but it takes a certain amount of casting prowess to use them.  And they don’t attract trout or reds from great distances, even though they may have rattles built into their structure.

However, there are  some smelly options that work well.  Seatrout, redfish, flounder and many other Gulf species have the ability to “smell” the scents of baits in very small amounts at great distances.  Live baits are good and while they do smell, cut-up chunks of the same baits do better.  There’s nothing quite like a chunk of cut pinfish, a half-crab, a shrimp tail, or a piece of cut ladyfish when it comes to smelly baits.

But smelly cut bait can be messy and several companies make easy-to-use and stinky sauces and gels that can be applied to artificial lures.  For many, there’s nothing like a squirt of Carolina Lunker Sauce on an artificial shrimp.  And for others, Berkley’s GULP! product produces a scent that’s really offensive to humans but deadly on trout and reds.  Other products, like FishBites lures and strips,  don’t smell to humans, but are great attractants for many Gulf fish species.

Finally, speaking of species.  Be aware that you’re likely to catch things other  than game fish while using smelly baits.  Sharks, stingrays and catfish can be fun to catch, but take valuable time away from putting dinner on the table!