This information may not be “official”, but our guess is that it will likely become so before Florida’s recreational bay scallop season begins in 2018:

At its December meeting in Gainesville, the Florida Fish and Wildlife Conservation Commission (FWC) discussed draft changes that would create regionally-specific bay scallop open seasons and would allow a trial scalloping season in state waters off Pasco County in 2018. Stakeholder input gathered over the past year was presented to the Commission along with an overview of the bay scallop fishery, an update on the status of scallops in St. Joseph Bay, and proposed management changes for the fishery.

This draft proposal includes both long- and short-term changes and will be brought back before the Commission at the February meeting for a final public hearing.

Regionally-specific open seasons, if approved, would mean the timing of the summer bay scallop season would vary across the allowable harvest area to provide a better scalloping experience for the public and maximize the benefits to various regions. For some regions, that means having a season that starts later so that scallops are bigger when the season begins and for other areas, that means having a season that starts during early summer to allow for more opportunities for those on summer break.

Allowing a short trial season in Pasco County, which has been closed to harvest since 1994, would likely provide an economic benefit to the county and create opportunities for local residents to scallop in their nearby waters.

If approved in February, long-term regionally-specific open seasons would include:

If approved in February, the following open seasons will be created by executive order for 2018 only:

The FWC will set a long-term season in St. Joseph Bay once the population in that area has more fully rebuilt.

Share your input on these season changes by visiting MyFWC.com/SaltwaterComments or emailing Marine@MyFWC.com. You can also learn more by viewing a workshop presentation at MyFWC.com/Fishing (click on “Saltwater Fishing,” “Public Comments/Workshops” and “Workshops.”

For more information or to view the presentations given at the Commission meeting, visit MyFWC.com/Commission and select “Commission Meetings,” then click on the link below “Next Meeting.” 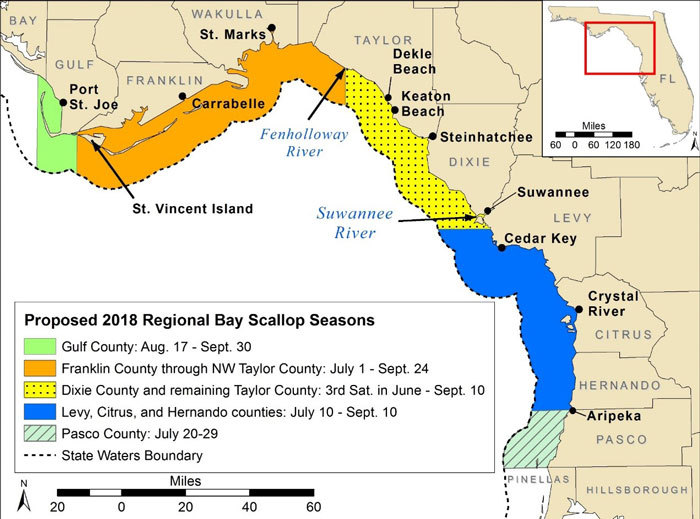 Map of tentative 2018 seasons. Final approval for these draft seasons will be considered at the February Commission meeting.