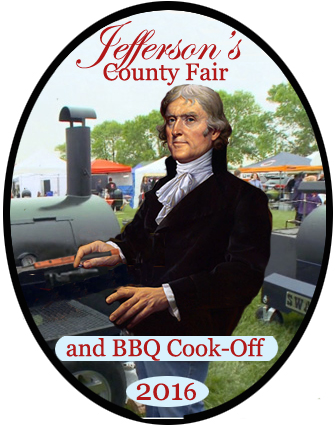 The Monticello-Jefferson County Chamber of Commerce has announced the 2nd annual – Jefferson’s County Fair and BBQ Cook-Off scheduled to take place on November 12 and will be hosted in Lloyd, Florida at the Lloyd Arena.  The festival, will host a variety of food contests aimed at BBQ fans, providing various entertainment shows that will take place throughout the event.

Supported by the Florida BBQ Association and sponsored by the Tourist Development Council & Jefferson County Board of County Commissioners, Farmer’s & Merchants Bank,  Tallahassee State Bank and C.W. Roberts Contracting (more to come), the Festival will honor the county’s heritage of cooking, food, beverage and culinary traditions.  The Festival will take place in Jefferson County, aiming to bring together hundreds of BBQ fans and people with a passion for cooking.  The most notable of all contests, the BBQ contest will challenge participants to cook chicken, ribs and pork butt, which will be judged based on three criteria: presentation, tenderness and taste.  A winner will be designated in each category, as well as a grand champion for all three categories.  The prize money for each winner will be determined by the number of entries in the contest.  The purse for the event will be least $2,000 as well as one of a kind trophies will be given out.

According to Katrina Richardson, executive director of the Monticello-Jefferson Chamber of Commerce, “The Chamber looks forward to offering this festival at a cooler time of the year. Our chamber members have the opportunity to have a booth space free if registered by October 12, 2016.  It will be an excellent chance to honor Jefferson County and the surrounding area’s heritage of cooking, and will allow attendees to meet other people with a passion for cooking.”

The Festival is scheduled to take place on November 12 at the Lloyd Arena, located at the intersection of I-10 (exit #217) and Hwy 59 behind the Econo Lodge, just 10 minutes south of Monticello and 10 minutes east of Tallahassee.  To enter one of the contests or find out more about the festival, contact the chamber at 850-997-5552, or visit the chamber’s official website at www.monticellojeffersonfl.com

Cash prizes are subject to increase with team participation