Please not that this event has been postponed due to Hurricane Michael.

You don’t want to miss this event!  If you’re a “yakker”, you need to paddle the backwaters of Taylor County and fish this tournament.  It’s a “catch, photo and release” format, hoping to conserve our inshore fish stocks.  The Gulf Coast Kayaking Club Catch and Release Kayak Fishing Tournament will be held October 13th, sign ups are taking place now. Go to our website TaylorFlorida.com, stop by Big Bend Outfitters or Walter B’s Store for an application or call us at 850-584-5366. 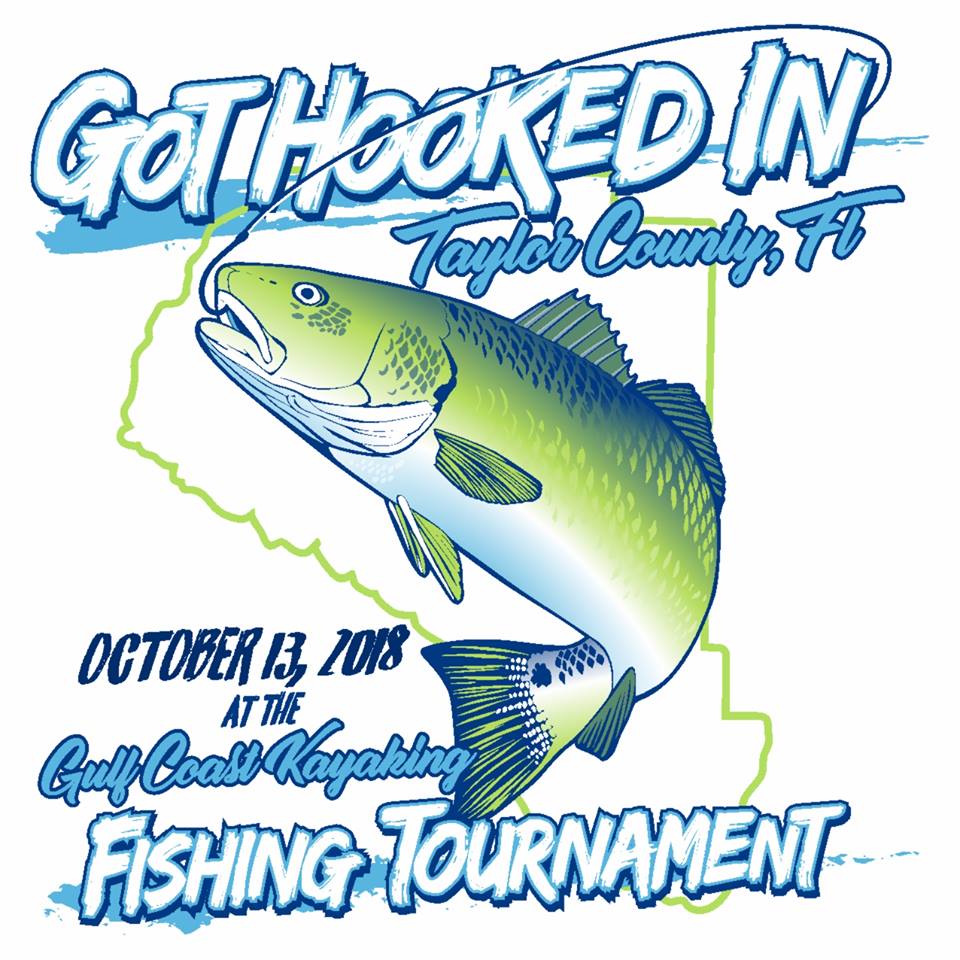 Here are a few helpful hints for kayak anglers, taken from The Saltwater Angler’s Guide To Florida’s Big Bend and Emerald Coast

Inshore and nearshore fishing along Florida’s Gulf Coast has as much to do with economics as it does with species. Of course, many inshore anglers long to be aboard a big sport fishing boat trolling the depths of the Gulf for fish of mammoth proportions. The reality, however, of a round trip that has fuel costs approaching that of the purchase price of a small outboard motor is staggering to many anglers. Inshore fishing, which includes small-boat, bridge, bank, beach and pier fishing, is much more accessible to the general public. So many game fish species come close enough to Florida’s Gulf shoreline that most anglers need only expend a minimum effort in catching dinner on a low-impact, low-cost outing. 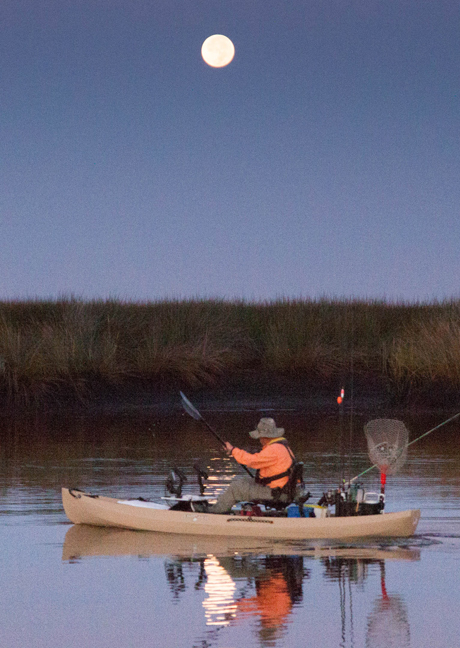 Red drum, puppy drum, channel bass, and redfish—they’re all the same—it just depends on where you fish. In Florida, we call them redfish. They are prized by all inshore anglers, not only for their table appeal, but also for their great fighting ability. The redfish population was almost decimated by the culinary craze for blackened redfish in the 1990s, but has rebounded since then. A statewide one-fish-per-angler-per-day bag limit is currently in effect. Many professional guides and conservation-minded anglers practice catch-and-release when fishing for reds in hopes of increasing fish stocks for future generations of anglers.

More finicky eaters than spotted seatrout, legal-size redfish cruise the shallow waters all along Florida’s Gulf Coast, devouring everything from crustaceans to small baitfish. Their downward-facing mouths give the impression that they feed only on the bottom—on oyster bars, rock piles and grassy flats. Crabs and shrimp are certainly part of their everyday diet, but make to mistake; small baitfish and commercial imitations attract quick and upward-oriented strikes.   There’s nothing like the sight and sound of a big red turning upside down in two feet of water to inhale a noisy topwater plug.

With the exception of wintertime fish found in deep channels or residential canals and big spawning fish found well offshore, reds, sometimes in schools, generally cruise the edges of flats, grassy shorelines, and shell bars in search of food. On lower tides, they can be found on sun-drenched shallow flats with their tails or backs out of the water, nudging dinner from grass patches or rocks. These fish are prime targets for sight-fishing anglers using light tackle or fishing with fly rods.

While many anglers insist that live bait is essential to catching large redfish, others believe that the smell of cut mullet or pinfish attracts them better. Smell seems to be important, but slashing lures do well, too. Shrimp, stinky in its natural, live condition, is a statewide favorite. Before hooking a whole shrimp, tear off the tail and push the hook up through the body toward the head. This will enhance the scent and attract more fish. Plastic jigs, sometimes ‘sweetened’ with a small piece of fresh or frozen shrimp or synthetic bait, bounced slowly across the bottom near shell or oyster bars, are also a sure way to catch reds. The use of a super-strong invisible leader, such as those made of fluorocarbon, is important, particularly in clear waters. Redfish have a second sense when it comes to recognizing solid fishing line and for rubbing leaders ragged on oysters, sharp rocks or barnacle-encrusted pilings.

Redfish can be wary prey if found on the flats in very clear water. Any loud noises aboard a boat or from wading anglers can signal reds that predators are nearby. Many professional guides argue that undue rocking of a boat by casters, particularly fly anglers, pushes a wave of water out toward redfish, making them move away. Movement by boats, splashing wade anglers, or hungry dolphins, the reds don’t know the difference.

Spotted seatrout are the mainstay of inshore fishing on Florida’s Gulf coast. Relatively easy to catch, plentiful, and mild tasting, these fish are found in shallow coastal waters from spring until fall. On colder winter days, they can be found in river and creek channels, and in residential canals, where they seek warmth in the deeper water.

Most spotted seatrout caught are within the regulatory slot. ‘Gator’ or trophy trout over 20-inches are most often caught in shallow, close-to-shore waters and don’t school up like the smaller fish. Catches of spotted seatrout in the 7-pound range have become more common since Florida’s gill-net ban went into force in the 1990s. Many experts reason that smaller trout are prey for larger ones. Checking the stomach contents of big trout at the cleaning table will sometimes reveal smaller versions of the same species there. In fact, a favorite wintertime deep-water trout lure is the MirrOlure TT Series—TT stands for tiny trout.

Trout are voracious eaters, and bigger cold-water fish sometimes eat out of sheer instinct even when they’re probably not hungry. The species can resist few types of bait. Natural forage includes pinfish, pigfish, shrimp, crabs, mullet and all varieties of minnows, generically known as white bait. Based on this fish’s eating habits, there are hundreds, probably thousands, of lures manufactured to attract spotted seatrout. Weighted jig heads with soft plastic tails, synthetic shrimp look-alikes, hard and soft-bodied plugs made to swim at various depths, and a variety of topwater lures crowd the shelves at marinas, tackle stores and bait shops all along the coast. Most lures and techniques work on trout, and I suggest finding a few you like and learn to fish them in different situations. Your tackle box will thank you.

Depending on air and water temperature, sunlight or clouds, and time of year, trout will hold at specific depths. Moving water, whether rising or falling, is best. Slack or slow-moving neap tides, usually occurring between the full and the new moon phases, make trout less eager to eat. Ambush-feeders, they prefer to attack baits that wash past them in sandy holes on grass flats, or along the edges of channels or bars.

Wintertime trout in deeper water are the exception. I think many of them bite because they’re simply bothered by baits hitting them in the head and attack out of sheer frustration at the attempts to hook them by the dozens of anglers above.

In general, big trout are spookier than smaller ones. Stealth becomes more important the shallower and clearer the water. No slamming cooler lids or loud high-fiving necessary!

Many anglers assume that tactics for seatrout are the same in cold as well as warm weather. Warmer months find trout moving from the shallows during the day to cooler deeper waters. If you plan to target trout early on a warm spring, summer or fall day, start early and fish close to shore. As the day warms, you’ll notice schools of mullet and white bait moving out toward deeper water. Many trout will move with them. Big summertime high tides hold trout closer to shore in the mornings. Conversely, trout don’t get to close to shore on a low tide, no matter the air or water temperature. However, sometimes rather than moving offshore, they move inside creeks or backwater holes and wait for the rising tide, becoming easy targets for anglers able to reach them with shallow-draft boats, canoes or kayaks.