There’s a common misconception that all fin fishing comes to a screeching halt when recreational scallop season opens June 25 on Florida’s Big Bend. Yes, sleepy fishing villages like Keaton Beach, Steinhatchee, Horseshoe Beach, and St. Marks come to life as multitudes of visitors pump much-needed dollars into the local economies. But while scalloping is the headliner on the list of things to do on our stretch of Gulf Coast, ‘fishing for fish’ still plays an important role for local folks and visitors alike during the short 72-day open season. 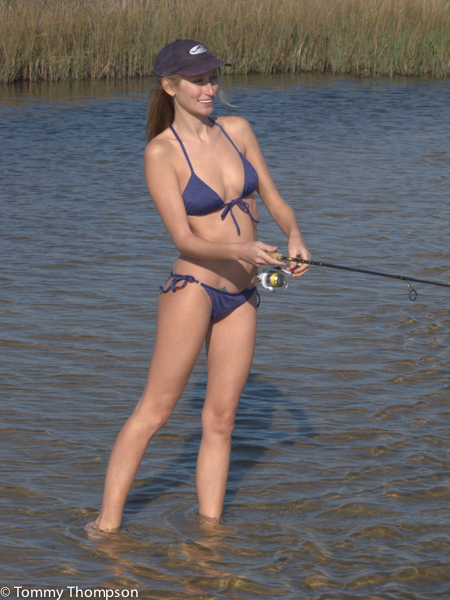 In spite of rumors and old-wives’ tales, hot summer days and waters that sometimes reach into the upper ‘80s do not shut down the ‘bite’. Fish must eat to survive whether it’s winter or summer, and July is no exception. In fact, while seatrout tend to head to slightly deeper flats, they are as plentiful as the pinfish and white bait upon which they feed. And redfish cruise the shallow fronts of creeks and rocky points, feeding on small mullet just as they do in the spring. Offshore waters are not necessarily infested by the crowds of scallopers who usually stay in less than 6 or 8-feet of water. They certainly rub elbows with the masses at marinas, boat ramps and while waiting in line at local eateries. But once offshore, there’s plenty of room to target reef fish species that move closer to shore, often as shallow as 30 feet, during warmer months.

While scallopers take up a lot of space whenever they’re launching, leaving port en masse, or back at the docks celebrating their victories over the helpless bivalves, they tend to stick together after the first scallops are found. Steinhatchee, in Taylor County, is a good example. In 2015, snorkelers found scallops early in the season on the grass flats off Rocky Creek, south of the river’s mouth. And they harvested the scallops there with a vengeance until the season’s end on September 24. I’m certain there were plenty of scallops at Nine Mile Bank (approx. N29 41.650 W83 34.101) and inside the Bird Rack off Big Grass Island (N29 43.438 W83 34.373), both spots known over the years to produce good catches.   But no one bothered to search these places that year as it was simply an easy matter of ‘following the leader’ to ensure a 10 gallon boat limit. Of course, in 2010 everyone headed to the Rocky Creek flats (at about N29 36.226 W83 25.872, just in case you want to try it this year!) and found nothing there but nice seatrout. That year, the main scallop migration happened up north near the deep cuts off Dallus Creek, at about N29 42.016 W83 32.124, where only seatrout, redfish and cobia had been the year before. And even with the 2010 scallop harvest lengthened, that one spot stayed active all summer. 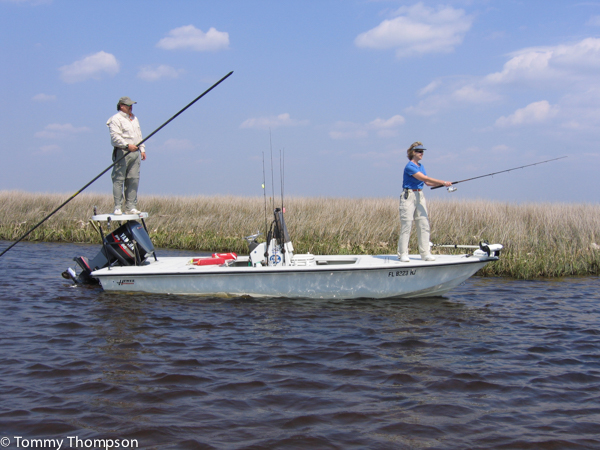 If you follow the advice above, you’ll probably find yourself with a good bit of fishable water to yourself. If you plan to fish for reds or early-morning ‘gator’ trout, look for small mullet jumping along the shoreline. You’ll need to get your boat shallow (and maybe even scrape off some of that precious gel-coat!), because these fish prefer hunting the shallows. At Keaton Beach, try the shoreline behind Big Grass Island or near Sponge Point (N29 46.902 W83 35.365), south of town. You can reach those areas from Steinhatchee, too. If you’re heading south of Steinhatchee, try fishing the shallow shoreline between Rocky Creek and Bowlegs Point (N29 31.290 W83 24.112).  At St. Marks, travel to the flats to the southeast, near the “rock garden”.

If you’re ‘skeered’ by seriously shallow water and a few rocks, take your crew to the deeper, 4 to 6-foot, flats, but to those in the opposite direction of the scallopers. There, drift live pinfish or 3-inch D.O.A. ‘glow’ shrimp under corks above any bit of mixed bottom you find. I’m a serious believer that fake shrimp work better than live ones on the flats in the summertime, as the pinfish don’t eat them with the same vigor as they do the live versions. And don’t forget to take a big spinning rod, rigged with a Hogy eel or a D.O.A. Bait Buster, just in case a tarpon or cobia swims within casting range.

As I noted, offshore fishing doesn’t usually involve finding crowds of boats anchored up over a single spot—at least on the Big Bend.  Offshore species like red grouper are always in season and good to eat.  But a better bet might be black sea bass or pink-mouth grunts.  These smaller fish are “sandwich size” but many anglers find them tastier than grouper!