If you’re looking for something to do over Halloween weekend in the Gainesville/Alachua County area, you can go wrong at the annual Micaonopy Fall Festival.    For the past 40 years, thousands have gathered under the old oak trees for the Micanopy Fall Festival. The festival is sponsored by a committee comprised of fifteen local nonprofit groups ranging from churches to youth groups to historical organizations. All of the proceeds from the festival go back to these groups to assist in their annual operating costs.

The many local artists, crafters, and musicians, represent works from all over the southeast. The tradition and ever-evolving quality of the show attracts a broad range of the buying public. Along with over two hundred displays of arts and crafts, there are other attractions. The main stage plays host to a variety of good-time music throughout the festival and an old-time auction of items donated by participating vendors on Saturday afternoon. 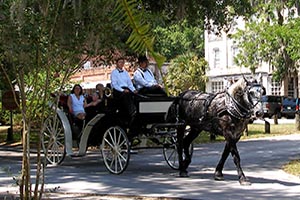 The Town of Micanopy (mick-ah-No-pee) encompasses 1.03 square miles near the Alachua-Marion County line between Gainesville (home of the University of Forida) and Ocala (the horse capital of the world)
in rural north- central Florida. Micanopy’s 594 residents occupy 338 homes. The beautiful southern community was named for Seminole Chief Micanopy (ca.1780-1849). The ancient oaks clothed in Spanish
moss enfold Micanopy’s narrow streets and dirt lanes and provide shade and Southern ambiance for visitors and families that have lived here for generations. Micanopy’s appeal is based on its rich,
sometimes savage history. Florida’s aboriginal records show that Hernando De Soto encountered an early Timucua Indian Village here in 1539 and later, Pennsylvania botanist William Bartram visited a
Cuscowilla village on this site in 1774.  Micanopy is the oldest inland town in Florida having been included in a land grant made by the King of Spain in 1817 to Don Fernando del la Maza Arrendondo of Havana
and St. Augustine.

Founded after Spain relinquished Florida to the United States in 1821, Micanopy became the first distinct American town in the new territory. Originally an Indian trading post, Micanopy was built under the
auspices of the Florida Association of New York. A leading member of this company, Moses E. Levy, along with Edward Wanton, a former Anglo-Spanish Indian trader, played important roles here. In 1822, a
select group of settlers and skilled craftsmen departed New York harbor and set sail for Florida. After disembarking on the banks of the St. Johns River (at the site of present-day Palatka), and with the added
labor of 15 slaves, these men forged a 45-mile road with eight bridges to Micanopy–a vital new pathway into the interior. These first settlers arrived on February 12, 1823, and were in close contact with both
Seminole and Miccosukee Indians, as well as the black descendants of runaway slaves who resided among them. This initial period was one of relative peace. Micanopy means “head chief,” a title awarded to
the leader of the Alachua Seminoles. For a time, this frontier hamlet was also known informally as “Wantons.”

The onset of the Second Seminole War in December 1835 caused great devastation. Nearby sugar plantations and homesteads were burned and entire families sought the safety of Micanopy, which had been
barricaded with log pickets and renamed Fort Defiance by the military. During the summer of 1836, the Battle of Micanopy and the Battle of Welika Pond took place here. On August 24, with most soldiers sick or
wounded, the US Army evacuated the fort and town and all buildings were intentionally burned. Afterward, Fort Micanopy was erected in 1837. The town was rebuilt after the Seminole War, with few of the
original inhabitants returning. Cotton replaced sugar cane as a staple crop and cattle production assumed new importance. Following the Civil War and with the advent of the railroad, the Micanopy area
became known as the “leading orange and vegetable growing section of Florida.” After a freeze in 1894-95, orange cultivation was curtailed, but farmers continued to flourish by growing winter vegetables for
northern markets. By the 1920s, truck farming was largely displaced by the lumber and turpentine industries. Many of the town’s larger surviving homes reflect the previous era of agricultural prosperity.

Today, excavations and preservation initiatives pay tribute to the Town’s historic past with the search for artifacts in residents’ yards. A local park, the Micanopy Native American Heritage Preserve, protects an
Indian mound.

Dedicated on the National Register of Historic Places in 1983, Cholokka Boulevard, once an Indian trading route,  is Micanopy’s main street,  and the Town’s primary tourist destination famous for its antique
shops. Micanopy’s eclectic mix of authentic rustic storefronts lure casual shoppers, collectors, seasonal scouts from all over the country, and Hollywood film makers (Doc Hollywood, Cross Creek, and most
recently, The History Channel’s, Top Gear). Charming diners and the nationally lauded Greek revival mansion, the Herlong Mansion Historic Inn (1845), provide Southern hospitality as a bed and breakfast. A
two-story brick schoolhouse (1895) now houses Micanopy Town Hall, the Town Commission Chamber, and the Micanopy branch of the Alachua County Library District. Across the street, the wood-planked
Thrasher Warehouse (1890) boasts the Micanopy Historical Society Museum and the Archives showcasing the relevance of earlier times for historians, genealogists, and students. Numerous historic homes
and old cracker houses add to the picturesque warmth of “the town that time forgot.”