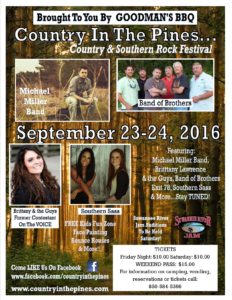 One of the most sought after Country Music events in the Southeast, the Country in the Pines Music Festival is right around the corner this Sept. 25-26 at Forest Capital State Park in Perry, FL. This event promises to bring with it one of the most exciting line-ups of country artists around, the 309C Band, the Michael Miller Band, Band of Brothers, Steven Flowers Band, Andy Simmons and the Suwannee River Jam Auditions to be held here during the event.

309C is a high energy, hard-hitting country/Southern rock band of young men that have a sound displaying solid talent well beyond their years. In just the past few years, 309C has opened for talented acts such as Matt Stillwell, Ryan Weaver, Charlie Daniels Band, Justin Moore, Tobacco Road and many others. Currently they are busy in the studio working on their new album.

In addition, there are some newcomers to the stage, the Steven Flowers Band. We were lucky to snatch these guys up quickly! They have bolted into the entertainment world with a bang and have captivated audiences all over with their mind-blowing southern rock performances. Our favorite local boys (Perry, Mayo…), the Band of Brothers will also be performing whom history has established, will always leave you wanting more! Another newcomer to the stage, one of our headliners, the Michael Miller Band is an amazing group of country and Southern rock performers. Michael Miller grew up in the heartland of Western Kentucky, but now lives in North Florida. If country music was a location, Michael Miller would call it home. The band was formed in 2013 and the Country in the Pines Music Festival is proud for them to be joining a powerful lineup this year! In addition, our very own Andy Simmons will be joining us on stage!

In addition to the artists listed above, Country in the Pines has teamed up with 1st Street Music & Sound Co. of Lake City, FL to not only provide the stage production but will be conducting their Suwannee River Jam Auditions on Saturday as well, giving aspiring artists the opportunity to audition for and perform on the 1st Street Music Stage at the Suwannee River Jam held in April of 2016 at the Spirit of the Suwannee Music Park, Live Oak, FL.

But, music is just part of it. There will be seafood vendors, a variety of other food vendors, arts and crafts, Mud Truck Show with cash prizes and more. A KIDS Zone Play Area with bounce houses, face painting and more. ADMISSION IS FREE AND THE EVENT ORGANIZERS WILL ACCEPT DONATIONS TO HELP WITH THE MASSIVE COASTAL CLEANUP DUE TO HURRICANE HERMINE. Camping is available, but limited so call early for reservations. Tickets are available for the Sept. 25-26 event at www.countryinthepines.com or at the Perry-Taylor County Chamber of Commerce office (428 North Jefferson Street). The event will be held at Forest Capital State Park located on Hwy. 19 South in Perry. For camping or other information, call the Chamber office at 850-584-5366.