From The Florida Sportsman Newswire: 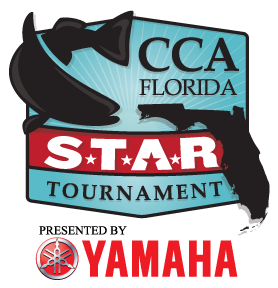 The CCA STAR Tournament has been a summertime staple for anglers in Texas and Louisiana for many years, on May 23, anglers in Florida will finally have an opportunity to get in on the action with CCA Florida’s inaugural STAR Tournament.

Thanks to the successful STAR blueprint developed by CCA Texas and Louisiana, Florida has a proven formula, but as Florida’s STAR Tournament Director Leiza Fitzgerald states, Florida is putting its own spin on the tournament.

Like the other STAR tournaments, CCA Florida STAR presented by Yamaha will run from Memorial Day weekend through Labor Day, for 108 days of competition. By catching one of 80 tagged redfish, anglers could win a new Contender 22 Sport, Pathfinder 2200TRS or Hell’s Bay Waterman. Other division prizes in the CCA Florida STAR will include college scholarships, River Hawk boats, Power Pole shallow water anchors, Costa Sunglasses, Engel coolers, Shimano fishing tackle, marine electronics, Bass Pro Shops, Live Watersports paddle boards & Marathon fuel gift cards – nearly $500,000 worth of prizes in all. Perhaps the most exciting of all, youth anglers are eligible to win a share of $100,000 in scholarships. The Youth Division presented by Bright House Networks includes kids ages 6 to 17 and will award at least 12 college scholarships.

By working with the Florida Fish and Wildlife Conservation Commission (FWC), the Florida STAR has added a few unique features of its own, such as the Marathon Petroleum Conservation Division that will help FWC study Florida’s fisheries. FWC’s research arm, Fish and Wildlife Research Institute (FWRI), is rearing some of the redfish that will be tagged and released on Florida’s west coast in late May. Each fish caught will help further the science of fisheries management and conservation, with the hopes of ultimately improving future hatchery efforts. Conservation is the name of the game, and in the Conservation Division anglers will record and share data about all of their catches to give FWC even more information to better manage the resource.

CCA Florida also worked with the Snook and Gamefish Foundation to create a state-of-the-art smart phone app for the STAR program. Membership application, registration and entering fish can be made right from the dock, boat ramp or boat using the new app. The Catch-and-Photo format is another new twist that allows all fish that are caught to be eligible for prizes. Florida Sportsman magazine has provided the “Official” measuring device which can be found at STAR verifications along the west coast. Best of all, prizes are not awarded based on the largest fish of each species. The Open Category, complimented by categories for kayaks, fly, ladies, youth and the guides division are other distinctive features of the Florida STAR. The licensed Yamaha Guides Division is designed to recruit more participants and will award $17,500 in prizes to the three guides who register the most anglers for the tournament. “Where most recreational tournaments exclude guides, we wanted to find a way to help these guys and gals who are some of CCA’s best supporters” said Fitzgerald, a licensed captain who developed the Guides Division.

STAR is a nonprofit tournament focused on attracting people to Florida’s outstanding saltwater resources. It gets families on the water and helps educate all anglers about the importance of conserving and protecting their coastal resources. Last year, Texas, with less than 400 miles of coastline, had 45,000 people fish STAR. By comparison, Florida enjoys more than 1,300 miles of coastline and boasts more than 1.2 million licensed saltwater anglers. With numbers like that, CCA Florida hopes to reach thousands of new anglers every year through the STAR Tournament.

“This tournament represents the most exciting opportunity in our history to educate the public about Florida’s marine resources and how we can best preserve the future for our children,” said CCA Florida Chairman Bill Camp.

Much of the excitement over this tournament stems from the enthusiasm of the sponsors that have provided overwhelming support to the launch of the Florida STAR.

“Maverick Boat Company has been an integral part of the success of CCA Florida for more than 25 years and they have stepped up once again with another donated Pathfinder bay boat,” said Brian Gorski, CCA Florida executive director.

The newer boat sponsors, Hell’s Bay Boatworks and Contender, have lent incredibly strong support as well. In addition to the boats already donated for Florida’s banquet program, these corporate stewards of our marine resources have each donated a second boat for STAR prizes. Other donors like Engel Coolers, Wells Fargo Bank, LIVETARGET Lures, Papa’s Pilar, Florida Sportsman Magazine, Finlandia and Livewater Sports have also made significant donations that will go to support scholarships and other prize categories.

During its first two years, CCA Florida STAR will release tagged fish on the west coast of the state providing an opportunity to catch a tagged redfish from Pensacola through the southern reaches of Everglades National Park. After those first two years, Florida expects to expand STAR tagged fish to the entire state and will potentially include more species.

For complete rules, listing of verification locations and to enter Florida STAR, please visit www.CCAFLSTAR.com and make plans to get in on the action this summer.