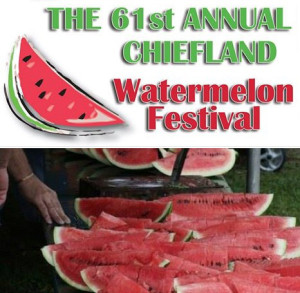 The 61st Annual Chiefland Watermelon Festival is coming up on June 6th. There will be contests, a parade, music, entertainment for the kids, and of course watermelon! This event will be taking place at the Train Depot Park in Chiefland from 8am to 2pm

The Annual Watermelon Festival is perhaps the biggest event in Chiefland during the year, drawing thousands of visitors from all parts of the state. The one-day event began in 1954, as the City of Chiefland wrapped up the completion of new sidewalks and streets. The Chiefland Civic Club decided there was a definite cause to celebrate! It was summer and the watermelon season was drawing to an end, so farmers donated their last watermelons for the celebration. Today, farmers continue to donate watermelons, which are served ice cold and delicious for all visitors to enjoy.

With time, the festival has grown, and now showcases arts and crafts exhibits from around Florida and neighboring states. There are plenty of children’s activities, including a watermelon seed-spitting contest! The watermelon parade, auction, weighing-contest, and the Watermelon Queen contest are just some of the festival highlights that draw spectators from all around the area