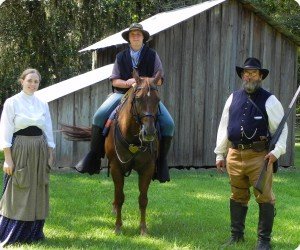 The reconstruction Era - The time after the War Between the States was very difficult.  This is an immersion event during which visitors encounter living historians from the year 1868. They will re-enact the life of many different people: the US Army Occupation Officer and soldiers, former Confederate soldiers, Irish share cropper, temperance ladies, cow hunters, freedmen, storekeeper and more.  Witness this pivotal time in our history as returning soldiers fought for work with foreign immigrants, cattlemen tried to rebuild their herds, and farmers were trying to scratch out a subsistence living. Temperance marchers tried to reduce the consumption of alcohol. The problems of reconstructing the Union were just as difficult as fighting the war had been. Because most of the war was fought in the South, the region was devastated physically and economically. Come see, hear and feel what life was like during a hard period when this farm first came into existence. Dudley Farm Historic State Park, 352-472-1142. Feb 23 & 24, 9 am to 4 pm.